This TBT falls on what would have been my Grandma Roth’s 92nd birthday. It is her third birthday in Heaven, so it seems only appropriate to honor her on the blog today. At the end, I’ll include the tribute I wrote and (very tearfully) read at her memorial service. 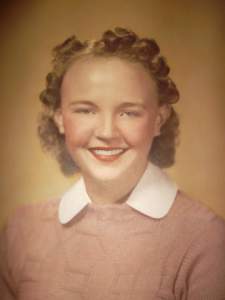 Grandma meeting me in 1974. This is possibly the first photo of us together. 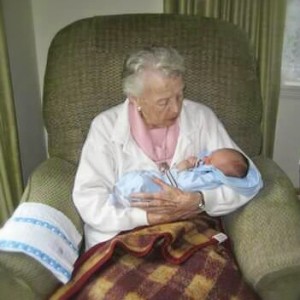 Grandma meeting my nephew Jonah in 2008. She absolutely loved babies!

Grandma and her Bible. One of my indelible memories of my grandparents is of them turning off the TV in the evening and taking out their Bibles for a little while. Grandma continued doing this until she became to weak to do so. What a legacy of faith!

Mom tells me I was 2½ the first time she packed me into the backseat of my Grandparent’s car and sent me South for a few days.   Staying all by myself with them became a regular occurrence during my childhood.  In my younger years, Grandpa was still working, so it was often just my Grandma and me together all day.  I have such fond memories of those times.  From my earliest memories of my time there, one of the daily constants were the walks Grandma and I took.

Grandma and Grandpa still lived on 122nd  when our walks began.  Grandma and I would set out from their home, within sight of I-84, and walk up to the Herfy’s on the corner of 122nd and Halsey, which I insistently called “Perky’s,” for coffee and a treat for me.   I now know that walk was ¾ of a mile one way!  Quite a jaunt for little legs.  Approximately half-way along our route, there was a pedestrian overpass.  Grandma would consent to let me walk up the steps and stand on the walkway to look down on traffic, but I could not go all the way across.  I’ll never forget the day when she actually let me walk all the way across the overpass and down the steps on the other side all by myself, as long as I came right back.  I’m sure she was not enjoying the experience one bit, but I felt so grown-up and big!

From the overpass we’d continue on our way.  There was a vacant lot just before the corner at Halsey that Grandma and I would cut through on our way to and from the restaurant.  It was full of trees, and Grandma and I would often stop there, sit on a stump, and watch the planes coming into Portland International, looking for “Flying Bananas” (bright yellow planes one airline used), before heading home.

These walks went on, day after day, visit after visit, year after year.  Just Grandma and me.  I never remember Grandpa joining us.

But times change.  Herfy’s became Arctic Circle and eventually Arby’s.  The vacant lot was fenced in, the trees cut down, and new office buildings built.  Grandpa retired, and, when the urban paradise that was their yard grew too much for him to maintain on his own, the house of my childhood was sold, and they moved to the duplex on 162nd.  The walks continued, though changed.  After the move, we’d walk around the housing development behind their place, oohing and ahh-ing at the houses (we even “trespassed” on a job site and took a self-guided tour of a house in progress) .  Grandpa started joining us, and was with us on that clandestine excursion.  Eventually, the walks moved indoors, into the malls around Portland.  I think Lloyd Center was my favorite.  Grandpa usually did his own thing, and met us at the skating rink at an appointed time.

As time went on, and Grandpa’s dementia progressed, even these walks became too much, and my walks with Grandma ceased altogether.  I’d still walk around the neighborhood by myself, but it wasn’t the same.   I’ve missed those walks ever since.

Several years ago, I found a plaque with this poem on it and gave it to Grandma.  It epitomizes my memories of my walks with her.

She doesn’t say “Now hurry up”,

She always takes her time.

Half hidden drops of dew.

Most people have to hurry,

They don’t stop and see

I’m glad that God made Grandma.

END_OF_DOCUMENT_TOKEN_TO_BE_REPLACED

I went down to the lower field and gave our piggies some love yesterday. Ricky was really into the scratches! Lucy, not so much.