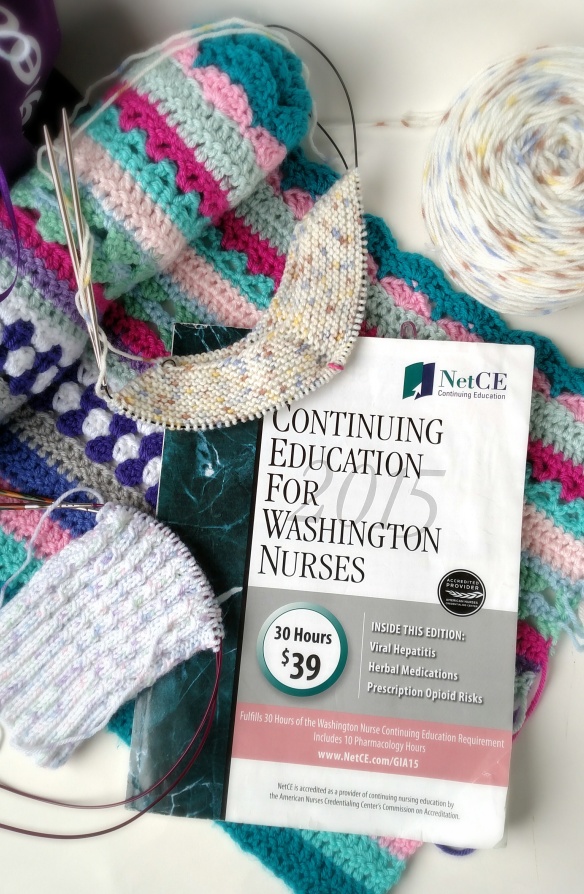 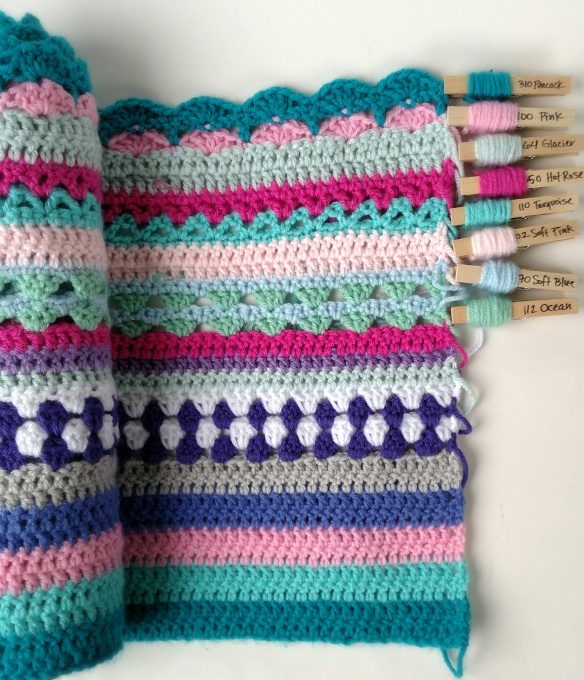 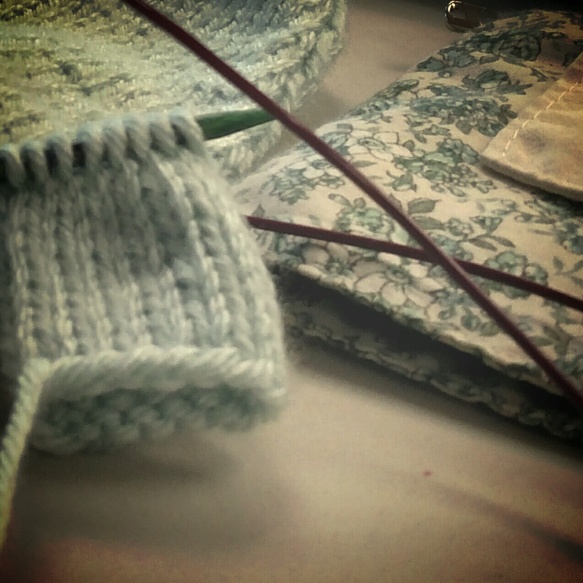 Oh my dear blog! How I have neglected you! I have a million excuses. First the business of Advent and Christmas…then the trip…then the exhaustion of getting back into the swing of working after such a nice break. Really, they don’t add up to a month and a half of silence. I had such plans. Ah, well. We shall begin anew with a WIP Wednesday post, just as we started in the beginning. A nice link up with the Yarn Along at Ginny’s will do us good.

A woman at my church recently started a business with two other women called Greater Northwest Fibershed. I really don’t know much about her business other than it involves alpaca fiber and fleece from local alpaca farmers and people (like me) to make things out of said fiber and fleece to sell. They provide the yarn, I make something pretty with really yummy alpaca yarn, give it back to them, and they pay me for my play…I mean…work. Anyway, what is on my hook currently is a test for the Fibershed. It’s a woven ribbon-like yarn that I think is alpaca and silk. You can kind of see it in the second picture. I’m making a simple cowl/neck warmer using a US-Q hook and single crochet. I don’t like the way it turned out, and it’s way too short, so I’m going to rip it out for the third time and try something different. I went crosswise. I think I’m going to go lengthwise instead. I do love the way the yarn looks in single crochet! If I work it right, each stitch is a different color. 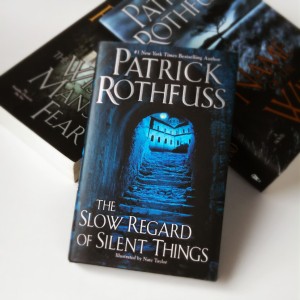 I’m soooooo excited! My friend, and favorite new writer, Laural got me hooked on Patrick Rothfuss’ Kingkiller Chronicle. I, along with the rest of his readers, am awaiting the release (heck, word that it’s done!) of the third book in the series with baited breath. In the mean time, he decided to tide us over with a tastey snack* in the form of The Slow Regard of Silent Things. The book is a spin off story of one of the characters we meet in his first two books. Her name is Auri. That, really, is all I will say other than if I were to ever have a white, female cat, I would name her Auri after this character. If you have never read the other books, anything I would tell you wouldn’t really make sense. You really should read them first. Patrick even says so. If you have read them, get your hands on this book! 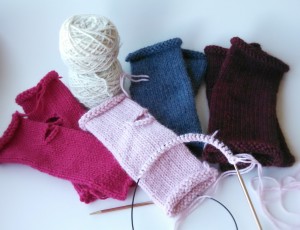 Part of the Fibershed is also going to involve crafting things for charity, specifically the homeless in our community. They call it “Hands and Fleece.” Right now, they are collecting fingerless mitts to distribute to a local shelter and the Tent City currently residing at Seattle Pacific University. Again, they provides the fleece (a lovely, soft DK weight alpaca yarn in this case), and we (my church’s knitting group) are providing the hands. I knit one mitt single stranded, but that took forever and produced a rather thin mitt. My bff, Lisa, decided to knit them double stranded, and I followed suit. Much better! Thicker mitts, but not too thick, and I can crank them out much faster. I just cast on for the second mitt of my fourth pair. The yarn really is lovely. I love that hot pink! The cream yarn is local, handspun alpaca. I don’t know what weight it is, but it feels thicker than the other yarn. I’m excited to give it a go next.

And that concludes this first post in a long while. I hope I still have a few readers after that hiatus. I do still have plans.  😉

Have a great rest of your Wednesday!

I had technical difficulties trying to post on Wednesday last week. Did anyone else? My posting template page would not load at all. I think, perhaps, it was God’s way of telling me to get to bed. Anyway… It seems to be working fine this week, so onto the post and the link-up at Small Things.

I’m still hooking away at my afghan. In fact, I’ve got a square mostly done in the tote at my feet as I type this. The good thing is that I’m not bored of them yet. I still get a little thrill as they grow and as I see the colors work together. This is a good thing since I still have such a long way to go.

I sort of picked up Divergent again. By that I mean that I’m carrying it with me to work. It’s long overdue at the library, and with Advent beginning soon, I may just return it and pick the series up after the new year.

For Advent, I signed up for an online Advent retreat with my friend, Tara, a Spiritual Director. I’ve been meaning to highlight her ministry, Anam Cara, for a while. Please do check out her website. I think she may have spots left if you are interested in journeying with her through the upcoming Advent season.

In addition to the retreat, I’m considering a couple books to read on my own. My parents gave me Ann Voskamp’s book, The Greatest Gift: Unwrapping the Full Love Story of Christmas, for my birthday. I kinda had forgotten that I had it when I ordered two books off my Amazon wish list on Monday. God With Us was recommended by Tara a couple of years ago, but has been out of stock every time I try to order it for Advent (usually because I’ve waited until the last moment). Silence And Other Surprising Invitations of Advent was another book recomended by Tara and the one she was reading for Advent last year. It looks good, but the subject is a very tender subject for me. It felt too raw last year. So, it will be one of those three, I think. God With Us won’t be here until next Tuesday, though.

It’s hard to tell from the picture, but I have a baby hat on the needles. It’s a copy of the finished one next to it. I used this pattern for a rolled brim hat for the hat, another for the leaf, and just did a short i-cord for the stem.

I’ve also made some progress on my Hogwarts Express shawl. I just finished the garter section and worked the row of increases. Now it’s on to the cables and beads. Eep!